“You have arrived,” chirped my Google maps voice in my pocket. I had turned my phone on airplane mode when we parked our vehicle just a little south of Little Flat Fire Tower but forgot to close the app. We had arrived indeed. The cellphone tower whirred and loomed above us. The night was clear for the moment after rain came pelting down on the last part of our drive. I mistakenly thought, not for the last time, that maybe we would get lucky this weekend and avoid the worst of the rain. I was wrong. 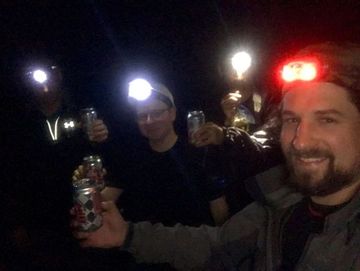 Our three evening miles were beautiful and dry. I was mesmerized watching the bright moon peak between clouds and illuminate the night. The rocks and dark vista near Indian Well were pretty spectacular even in the dark, and we found our perfect campsite right where it was supposed to be. We had celebratory DC Braus and settled in. It rained very hard over the night once our shelters were up and also cleared up by the time we were ready to get up. I thought again (and said out loud), “I think we missed the rain!” 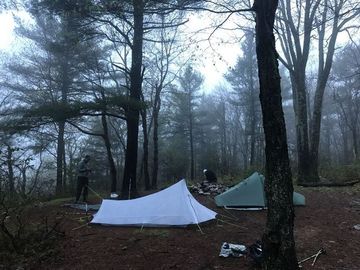 An hour or so into our big Saturday 24 miles, it began to rain and rain and rain. Not only that, the trail itself was so saturated with the water from the heavens over the previous two or three days that it often felt like we were walking in a stream itself, the Mid State River. I had never quite seen anything like this in PA before. But the MST is the strange gift that keeps on giving! The rocks, as you can imagine, were even more difficult as slick obstacles. We strung out a bit on the trail but Chris, Mike VW, and I kept bumping into each other throughout the day. You could tell there were some good vistas . . . but we couldn’t see much in the rain. I snagged a very brief sit down break at the top of a rocky section for lunch but I doubted we stood still for more than a few minutes at a time. We went under a rather daunting culvert under US 322 that looked worse than it actually was, and continued on our way. 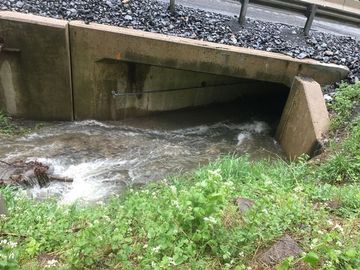 We arrived at our campsite not far from Poe Valley State Park at 5:00 p.m. only to find it located across another swollen stream! We warmed up, ate for the most part in our shelters, and were fast asleep when Brian rolled in to camp around nine p.m. 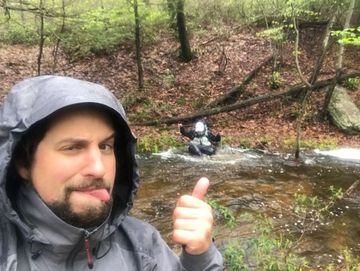 The next day we were moving by 6:30 a.m. and got to enjoy the easy-walking and delightful Poe Paddy Tunnel of some railroad grade trail. 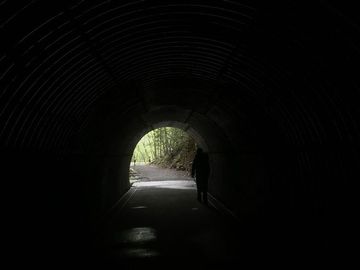 Then we hiked back up the ridge in the wet wetness and kept on going. We were surprised a bit by a section of raging stream without a bridge. And so I took selfies while Mike forded and nearly lost his footing. There was, unbeknownst to us, a private bridge a short bushwhack upstream. 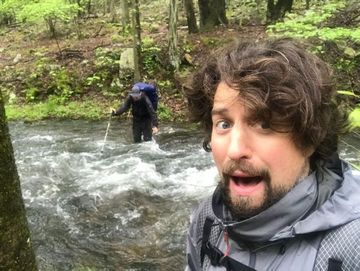 We were rewarded with some relative dryness at the top of the rattlesnake area (no snakes, fake or real, out and about this day) so enjoyed our rock lounge chairs. 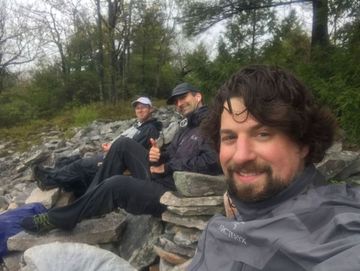 In the end, the first three of us were off the trail by 1:30 p.m. and Brian an hour later. We reversed the shuttle, had some beers and burgers in Harrisburg, and made it back to the DC area by early evening. Hurrah! Despite being wet most of the time and even losing some of the great views promised in this section, we loved it and can’t wait for more MST. As we contemplate the legend of Hairy John, I really wonder what it must have felt like to live and love the rain. He probably would have been overjoyed by all the water. 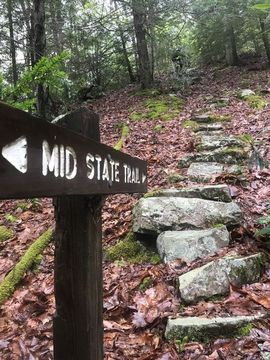