Saturday, May 27, the group arrived at Grindstone Campsite between 12:45PM-1:15PM and was on Mt. Rogers trail by 1:35PM. All of the weather reports prior to Saturday called for rain and scattered thunderstorms through Monday. Each day it felt like we were racing the storm clouds to the campsites!

We followed Mt. Rogers counterclockwise to the AT, made a quick trip up to Mt. Rogers summit, and stopped for the night just after the Thomas Knob shelter. This area of the trail, including all of the campsites, was very crowded. We were happy to find some space fairly close to each other. We could already feel the wind picking up across the campsite and hear thunder in the distance when we started setting up camp around 5:30PM. 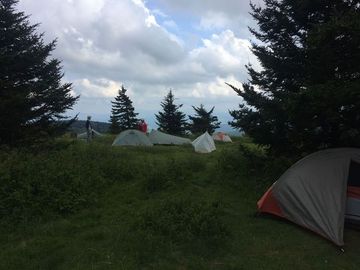 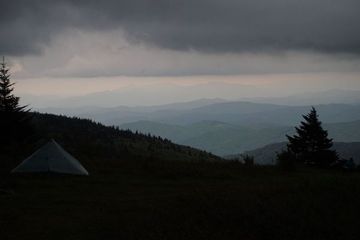 (This is one of my favorite photos--thank you, Carrie P!)

Luckily, we were all able to cook and eat dinner, and Kathryn and George made a nice, warm fire before the rain pummeled through around 8:45PM. Then… the lightening! What a show we had! Twice that evening we had lightening and thunder roll through. Theo was kind enough to walk around camp to check on everyone after the first. Most of the tents held up to the wind and heavy rain, and a lot of lessons were learned on how to tie tarps or fasten stakes for the next night. Everyone survived with a good story to tell!

Sunday morning we were ready to go on the trail at 8AM. There was a heavy, misty rain that morning. A couple of us had trouble lighting Esbit and George taught us that a small piece of petroleum jelly cotton ball would get it started. Worked like a charm! Kathryn headed out on the trail around 7:45AM to keep a steady pace. We arranged to meet with her at the Bearpen crossing and then Scales. We stopped near the park boundary around 9:30AM for a snack, then again past the Wise Shelter around 11AM for lunch, water, and a splash in the creek. 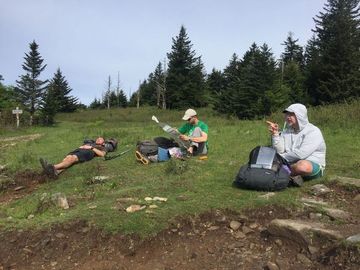 By 12:30PM we were already at the AT/Bearpen Trail crossing. At this point, Theo had checked his phone and reported that the weather forecast called for thunderstorms at 4:45PM. Some of us were not sure if we would go the extra loop to First Peak Trail because of threats of deep mud, but with nothing else to do so early in the day, and knowing that we’d probably out-pace the storms, we jumped in. The warning signs were true; the trail was very muddy! It was passable though and the heavy rain the past few days made the trail much more like we were walking through a creek than a muddy trail. 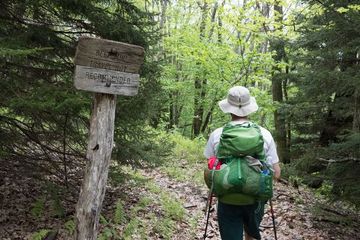 By 2PM Sunday, we were at the third peak and whizzing down the ridge to meet Kathryn and take a rest at Scales. We followed the Crest Trail from Scales close to where it meets Pine Mountain Trail to set up camp for the night. We arrived around 3:30PM and started setting up quickly, thinking that a storm was close by. Only a few minutes after getting to the campsite, George’s hammock ripped in half! He ran through the possibilities and decided that with so much daylight left and the possibility of another bad thunderstorm, he would hike down (about 3-4 miles) to his car and head home early.

We were all disappointed to see him leave! (All the while, thinking that this was a planned test to see how I handled the rest of the trip as a new AO without him! Did he really have two hammocks—one new and one ripped? Would he actually be close by watching to make sure we’re OK?…) David and I were on this trip in 2015 led by Mark, so I was confident we'd find our way back to Grindstone safely the next day. George was able to keep in touch with us about his safety by texting Kathryn's satellite phone, and we were all relieved to receive his updates about when he reached his car and eventually home.

We lucked out with the weather again because we enjoyed spending time together at camp Sunday evening without any storms—lying on boulders and chatting, and cooking and eating dinner together. 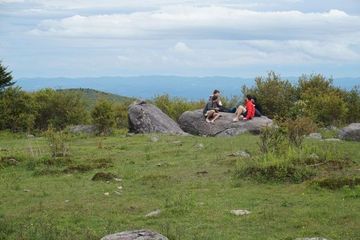 The temperature started dropping and Kathryn brought the group together with a big, warm fire. By 9:30PM all of us headed to bed. There were two small rain clouds that passed through that evening but nothing compared to Saturday night!

Monday morning we were ready to go on the trail again at 8AM. Aileen and others reported that they saw and heard ponies frolicking around the campsite earlier that morning. There was a dense fog over the campsite and trails were difficult to see so Kathryn stuck with the group the rest of the way. We took Cliffside Trail around to Lewis Fork and made it to the road by about 10AM. I forgot that we had to take the horse trail (not the hiking trail) to get an easier connection to Fairwood Valley Trail. A few people caught it but they followed me anyway and then walked the road a bit to the trailhead farther down to the east. (The group was so nice to me!) We climbed up a few hills on the trail and made it back to Grindstone around 10:35AM.

We all cleaned up, changed shoes, and said our goodbyes. Most of us ended up meeting for lunch at Macados in Blacksburg, VA. It was delicious!

The whole trip, Max! and Maria were our trail blazers at the front of the line—thanks for leading the pack! I appreciated how kind, capable, and cooperative everyone was in the group. I think we all enjoyed the long weekend getaway and I’m looking forward to visiting this area again soon! 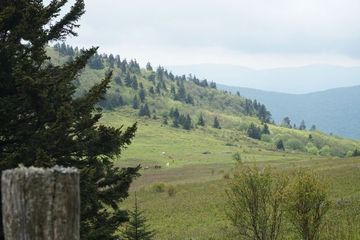 (Another great photo from Carrie P)