If you see a bear as you’re setting up camp, do you sleep better that night?

If a tree falls five minutes later, without the slightest breeze, do you assume the bear knocked it over?

These were the questions we pondered as the day drew to a close Friday night. As it was one of the longest days of the year, we weren’t enveloped in darkness until a bit after 9 PM.

Beth, Dizzy, Boomerang and I had met up at the Berry Hollow parking lot around 730 that evening. The original plan was for us to individually hike up to our camping spot for the night where Berry Hollow runs into the Old Rag fire road, but after Beth pointed out that the car in front of us on the drive in kept waving at us, I recognizing the DMB sticker and realized it was Boomerang. As we finished off our pre-hike subs, Dizzy joined us, so we completed the approx. 1 mile walk to camp together. We ended up camping on the right side, just before reaching the fire road, but Beth pointed out there was additional camping on the far side, if need be.

After setting up camp, we were visited by a deer, who, even though we could see its ribs, seemed to be a little too comfortable walking up to humans to beg for food. After said deer panicked, we turned to see a decently sized black bear watching us from afar. After some coaxing (in full sentences, no less) by Boomerang and some clapping, the bear meandered off. Minutes later, a tree tumbled near our camp, leaving me to wonder what the sound would have been like if we weren’t there to hear it. That night we were joined by a few more deer, and quite a bit of rain.

Saturday: Wake-up at 6, and on the move by 645. We stopped briefly at the cars to remove a few grams of trash from our packs, before continuing down to the Cedar Run parking lot. At this time, both Berry Hollow and Cedar Run lots were nearly empty. We began the fairly steep ascent up Cedar Run, passing some scouts and some swimming holes. With the humidity, Boomerang and I decided to stop for a dip and water topoff at the second stop deep enough for wading. A few minutes later, we were met by someone who was camping nearby, telling us how he would not let us leaving without sliding down the rough-looking rock face into the wading pool. After he demonstrated and used some old fashioned peer pressure (my 62 year old mother went down this water slide no problem!) we both gave it a try and walked away refreshed and intact.

Toward the end of Cedar Run trail (maybe .25 miles before Hawksbill parking lot), I saw a small campsite on the right. Maybe not large enough for >4, but an option for future trips. After regrouping at Hawksbill parking lot, we continued up to the viewpoint (reaching it ~10a), and were not disappointed! 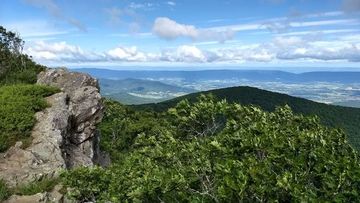 We then continued to the lodge for lunch. Spirits were high, and were only bolstered by the sign announcing a taphouse at the lodge. Sadly, they didn’t open until 2, and we were there…at noon. We decided to attempt to drown our feelings with a blueberry ice cream pie, but were underwhelmed. Due to the noise (they were using a leafblower to move dust and leaves) and the mediocre view, I’d recommend lunch somewhere else on future trips.

We then continued along the AT, taking the side trail to Old Stony Man (crowded), then back to the AT for Little Stony Man. There was yet another overlook a bit afterward, a whole 182 yards off the trail. This third viewpoint was the best of the bunch. With a fairly small group, we stayed somewhat close together throughout the day. Dizzy and Boomerang’s speed gained from their through hiking past showed, with Beth and I doing our best to keep up. Even with the elevation, we made very good time. We left the AT and switched to the Corbin Cabin trail, reaching Corbin Cabin fairly early in the day (before 4) so we decided to spend some time recharging by the stream. An hour or so later, we finished off the last 3 miles, finding a camping spot after the intersection of Hot Short Mountain trail. Right near the trail intersection, there were two well established sites (taken) so we begrudgingly continued walking. We found a semi-clear spot not far down. The next day as we walked, I saw quite a few more established sites along the river, so in the future if the first few are taken, don’t panic!

We set up camp, made dinner, and along the way found a snake curled up not too far from our tents. It blended in remarkably well with the leaves, rocks, and sticks on the ground. After hanging food, we again wandered down to the river to relax until the sun set, ~9p.

Sunday: Again up at 6, on the trail 645, hoping to beat the Old Rag rush. As we crossed the river and began our ascent, our legs had no problem reminding us of the elevation done the day before. We passed a few trail runners, and some small groups coming down the main Old Rag path. However, as we reached the scrambles and stashed our trekking poles, we were pleased to see no crowd, no line of tourists, and really no wait whatsoever! The day was warming up, and the weather cooperated to give us beautiful views. We stopped to enjoy the vista, and also did our best to consume any excess snacks. We had some interesting combinations – mango plus spicy jerky, Oreos plus hot Cheetos. Though our crew had low gear weight, we didn’t cut corners in the calorie department. 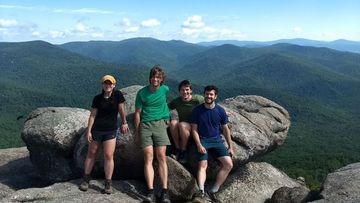 We then continued the trek to the top, soaked in the view, and began our descent. After finishing the fire road, we passed our campsite from Friday night then continued down Berry Hollow 1 mile to return to the cars a bit before 11a. In sharp contrast to when we arrived to an empty lot on Friday, the parking was now full of overflow for Old Rag.

We stopped for a lovely brunch at Grill 309 in Culpeper (thumbs up!), before parting ways and returning home.

Thank you all for coming with! Fabulous hike, fabulous weather, fabulous people! I’d be interested in another Shenandoah loop while the days are long, so if you have an idea, let me know!