"Audible: To make an unexpected last minute decision. This definition is derived from its meaning in football."

That's how things started, and Karan (B.A.) learned a new expression. It was around 10:00 p.m. on Friday evening and things hadn't been necessarily on time up until that point. Between metro delays, some extra 66 traffic, and Andrew's (Hang Glider) GPS skills -- not to mention connecting a DC-based crew with a another two cars from PA and MD respectively -- we were about an hour behind. We made the wise decision to reposition our cars back at Tomahawk Pond Campground for a walk up Hunkerson Gap Trail to start at the exact spot on the Great Eastern Trail both my group and Michael's left it in February/March. This took out the mysterious Stairway to Heaven campsite, 360 degree views, potential rock scramble, and extra few miles of ridge walking but saved us from another "surprise" 30 mile day on Saturday. We grabbed some beers from my car, walked in about half a mile, and caught up a bit huddled around Dan's (Heavy D) cowboy camp setup. 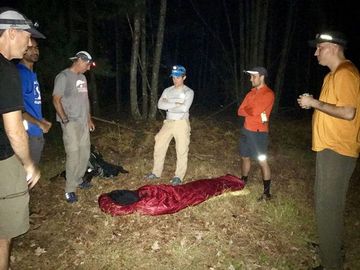 The next morning arrived and up we went to roll up and over the North Mountain Ridge, descending Snyder Trail -- technically now part of the Great Eastern Trail -- to pass a rather unique driveway decorated in fine local fashion. 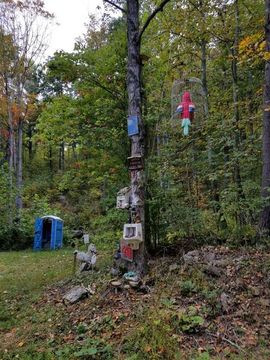 On we went, knowing that the next few miles or so would have us on some busy valley roads before we got to the other ridge and the forest roads and trails that would welcome us the rest of the weekend's journey. Things were quite lovely, actually, and certainly warmer than would have been expected for late September. I for one didn't put on anything other than my one hiking t-shirt the entire weekend. Our first treat for the trip was a delicious and welcome home cooked breakfast at the Green Valley General Store and Restaurant. It was early, nobody was tired or even necessarily hungry, but DC UL doesn't pass restaurants on the trail. We enjoyed Green Valley's eggs, ham, potato wedges, conversation, and hospitality for the next hour or so and then continued on our way. Luckily, the road miles passed quickly and nobody was flattened by a truck roaring by at 55 miles per hour. 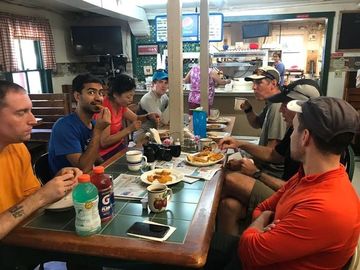 Our first sign that water may actually be an issue was spotted when we crossed the North Fork of the Shenandoah River near Blue Hole. The, um, river looked more like a seasonal stream. Nobody even thought to take any water, however, and I certainly didn't think to say anything as trip leader. There were lots of blue squiggles on our maps and we were camping near German River toward the end of the day, so we should be a-ok. Let's discuss maps a bit. Because we had a lot. PATC Map F, Nat Geo Maps 791 and 792, print outs from the PATC website specifically on the Great Eastern Trail, and of course several GPS units with preloaded tracks. This was an exercise in quantity over quality because nothing really quite noted for sure where exactly the Great Eastern Trail went. To make this short story shorter, we stuck together, used our myriad navigation tools, and not once came close to being off trail. It was just a little bit more eventful than the normal follow-the-blaze routine that often makes up our weekend trips. I thought it added to the fun and adventure of it all and I look forward to more of the same on future GET excursions. 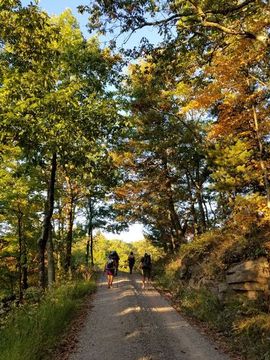 After rolling up and over several ridges on a long forest road, we finally met up with the mysterious trail that would connect us with the German River in about seven miles. Though it was too new to be on any of our maps, Carr Mountain Trail turned out to be a well-crafted and well-blazed trail. We fell into different hiking paces on this very clear route, and spent the next couple hours drinking the rest of our water and dreaming about the German River. Karan, John (Doc, The Look), Sophie, Dan, Andrew, and Russ ended up near the German River first and I popped off of Carr Mountain Trail as I finished my last sip of water. I could see most of the crew down a steep embankment looking like they were panning for gold amongst the rocks and mud. Oh great, I realized, this was the German "River." We poked around a bit and decided it was better than nothing. We filled up and moved on another mile or so to a good-looking campsite along the banks of the German "River." Dry as a bone. We split into a couple groups to see if we could find water anywhere along the "river" and did end up finding a couple moving puddles to pull from. It would have to do. We didn't see water the rest of the trip.

We settled in, built a lovely fire, and enjoyed Russ' Spanish charcuterie spread of chorizo and manchego (and a delicious Rioja to pair with it), along with bourbon, tequila, and the dry Madeira I decided to bring in place of whiskey. Dan and I enjoyed a fine cigar as well. It was another amusing and inspiring night of DC UL fellowship. Shortly before we settled down for good for the night, a pickup truck came racing down the presumably closed forest road at a fast clip and Karan dashed over to make sure his sleeping set up and camera didn't get run over. A second, slower, pickup truck followed and we noticed some dog cages in the bed of the truck. We figured they were bear-training their dogs and hoped they weren't upset that we took the only campsite in the area. They didn't return so we figured we were good. Karan, Dan, and I cowboy camped to enjoy the stars and warmth of the unseasonable autumn evening, though the acorns and sticks raining down from the trees was occasionally unnerving and even prompted me to scream out in the night after a near hit. 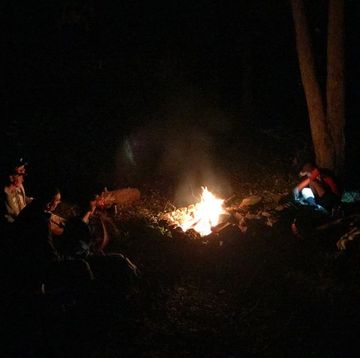 The next morning, we proceeded up and out of the German "River" valley and came out to the top of the ridge again to enjoy some early fall color and an occasional view as we made our way to Route 33 and our car to shuttle the drivers back while the passengers found some shade and made friends with a large group of James Madison students -- and a couple who decided they needed to make-out in the middle of the High Knob Parking Lot. Another 40 or so miles of the Great Eastern Trail's Headwaters Section was in the books and all of us were eagerly talking about getting out again to do the next segment. DC UL loves a good trail project and this one has been all we could have hoped for. 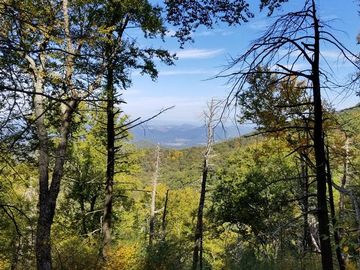 Thanks for capturing the essence of the trip, Evan.

I put the gpx files on Caltopo (Thanks Russ for letting me borrow your GPS): https://caltopo.com/m/LD5A

If we started from Orkney Springs, we would have hit 30 miles on Saturday :)